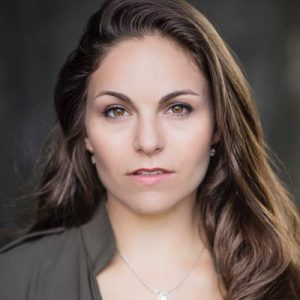 The Broadway World Reviewer, Gary Nayol wrote “Her [Maitland] singing is worth the ticket price alone, belting into one of London’s more tricky auditoria with total commitment and great technique, a masterclass in how to go full-on musical theatre passion without ever losing sight of the fact that the character is supposed to be real. She veers close to opera (as does the largely sung-through show from beginning to end) but that’s a compliment in a production of this ambition. One of 2017’s best performances in the West End arriving late in the year.”

Carolyn is also known for playing Grace Farrell in the recent 2019 tour of Annie the Musical and Molly Jensen in Ghost (as a replacement to original cast member Sarah Harding), opposite musician and actor Andy Moss as Sam, on the 2016 national tour.

She was born of the Isle of Wight but now lives in London with her fiancé and has one sister who is a former ballerina and now runs a dance school. She has wanted to be a West End Singer from an early age. 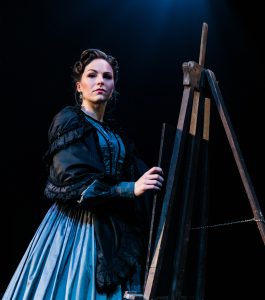 an Actor and dancer for Reach for the Moon for LWT and a backing dancer for the MOBO Awards in 2002 for ITV before working with the late Brian Rogers on Broadway Christmas Spectacular. She joined Spirit of the Dance/Broadway in 2003 for 2 years before becoming lead vocalist on the QE2 for Belinda King Productions.

In 2007 she joined the International tour of Mamma Mia. The following year she was offered the roles of 1st Cover Mabel (she had to wear a fat suit for this role), 2nd Cover Serena, Miss Bell & Swing on the UK tour of FAME. She was given her first lead understudy on the tour of High School Musical 2 as Gabriella.

2010 consisted mainly of caberets and workshops until late in the year when she was offered her second lead understudy role as Lucy Harris in the musical Jekyll and Hyde produced by Bill Kenwright. She played opposite Marti Pellow from the 90’s band Wet, Wet, Wet.

In 2012 she debuted her first West End show as a West End Performer understudying the roles of Vivienne and Serena in Legally Blonde at the Savoy Theatre.

The following year she understudied Hannah Waddingham in the role of Lilli Vanessi/Katherine in Chichester Festival Theatre‘s 2012 revival of Kiss Me, Kate directed by Sir Trevor Nunn. That led to creating the role of Rose and understudying Rebecca Thornhill in the role of Karen Holmes in From Here to Eternity at the Shaftesbury Theatre, London in 2013.

In May 2014 Carolyn was to understudy Tamsin Carroll as Ellen Scott in the anticipated West End revival of MISS SAIGON, produced by Cameron Mackintosh and directed by Laurence Connor.

In 2015 Maitland starred in her first lead as Kathy Selden in Singin’ in the Rain at Kilworth House Theatre directed by Mitch Sebastian.

Later that year she was to return to MISS SAIGON as Ellen Scott.

She went on to star as Sally Bowles in Cabaret at ACT Aberdeen and the Daughter in The Memory Show at The Drayton Theatre.

Groundhog Day premiered in London in 2016 at The Old Vic in London where Carolyn created the role of Joelle and understudied the part of Rita Hanson.

In 2017 Carolyn took over the role as Molly in Ghost from Sarah Harding due to the subsequent pain from an injury she received on the third series of The Jump. The Carns Theatre Passion reviewer said “Her voice is just gorgeous and she carried all the numbers she was part of. She particularly stood out in her Act One solo ‘With You’ which bought tears to many eyes”.

In November 2017 she starred as Marion Halcolme in The Woman in White, with a revised score, which opened at the Charing Cross Theatre in London. Lyn Gardner of The Guardian said “It’s a shame that Lloyd Webber and Jones turned Collins’ proto-feminist Marian into a more mundane standard-issue romantic heroine. But Carolyn Maitland sings with texture and gives the character definition.”

Carolyn joined the West End revival of Annie the Musical as Grace Farrell, that began at the Piccadilly Theatre in London when it went to Ed Mirvish Theatre in Downtown Toronto, Ontario, Canada. Television and stage star Lesley Nicol starred as Miss Hannigan.

She continued playing Grace in the 2019 UK tour of Annie the Musical, opposite Anita Dobson, Lesley Joseph and Craig Revel-Horwood who all played Miss Hannigan.

In 2020 she will be playing the role of Rebecca Hershkowitz in the Park Theatre’s production of RAGS the Muscial playing opposite Dave Willetts who will be playing Avram.