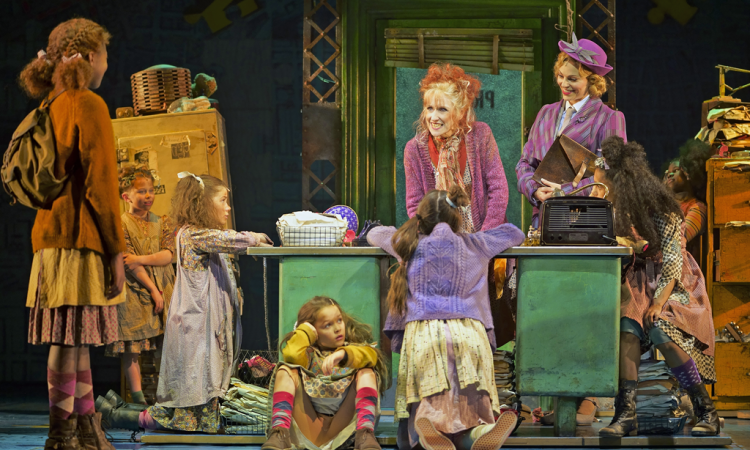 Having grown up watching film versions of Annie,but never seeing it live, the musical had a lot to live up to. It didn’t disappoint.

Starring Anita Dobson as Miss Hannigan and Alex Bourne as Oliver Warbucks, the show is a delight. It dives straight into the classic musical numbers, such as Hard Knock Life and Easy Street.

Annie offers low comedy for the adults in the form of Miss Hannigan’s flirtatious innuendos towards male characters. Children will enjoy the way the orphans tease their tyrannical ruler. Annie’s dog Sandy is a favourite with the audience too who coo in delight every time she appears onstage.

Anita Dobson does an exceptional job of turning a glum character into a hilarious anti-role model. Her over-the-top facial expressions as she mocks other characters create some outrageously funny moments. I dare say her fully stocked gin fridge had a few adults a little envious.

The young performers playing Miss Hannigan’s orphan girls on my visit were Team Chrysler. [Some kind of code perhaps? Ed.] Taziva-Fye Katsande was an exceptional Annie and performed with enthusiastic charm.

The set design adds an exaggerated nature to this production. Puzzle pieces light up the the surrounding stage, but their meaning is only made clear at the end.

[SPOILER ALERT!] Annie’s journey to find her family is complete even if they aren’t the family she expected.

Annie takes the adults back to their childhood, whilst creating new memories for youngsters watching it for the first time.

Annie is at Bradford Alhambra Theatre until 27th April 2019.