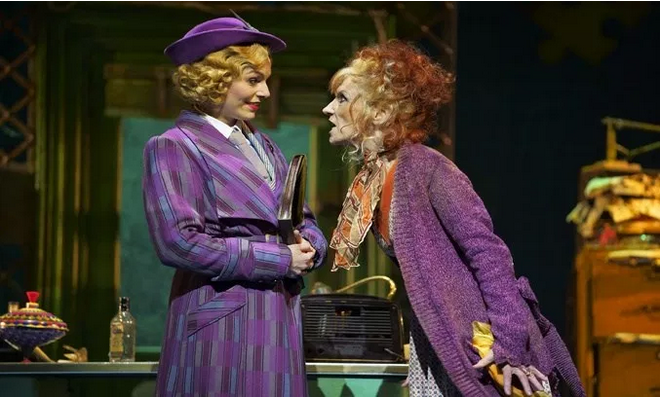 Anita Dobson gives the performance of a lifetime in Annie the Musical.

It’s his assistant Grace Farrell however, who threatens to steal the spotlight from any scene she’s a part of. Actress Carolyn Maitland is at home on the stage, and has one of the most beautiful vocals I’ve ever had the pleasure of hearing in person.

Annie often seems to be a story that splits audiences right down the middle. It’s the marmite of musicals; you either love or hate it. There’s something utterly heartwarming about a young orphan girl being taken in by a billionaire, but then you have the rest of the kids left at the orphanage who are still looking for their forever homes leaving you feeling a little cold.

Fortunately, the cast of the show currently residing at Manchester’s Opera House do more than enough to bring this production to life, delivering stellar performances from start to finish and high-energy choreography through each of the toe-tapping numbers.

Press night saw the brilliantly-talented young Faye Katsande step into the role of the titular Annie; a popular choice with everybody in attendance and someone who was described by one audience member in the interval as ‘the best she’d ever seen’. Her vocals were on point throughout the night and the way she exuded confidence as the boisterous, afraid-of-nothing Annie was a sight to behold.

One of the biggest cheers of the night came early on in the show, when Annie and her fellow orphans came together to give an awe-inspiring and passionate rendition of It’s A Hard Knock Life. Buckets were slammed on the ground, each of the mini stars painted their faces with brilliant expression, and I almost felt the urge to give an early standing ovation. If it weren’t for my own personal anxieties about looking a fool in front of the rest of the crowd, I certainly would have done just that.

Though she’s playing the villainous Miss Hannigan, Anita Dobson is a major hit with the crowd. She embodies the character so well, it’s surprising not to see a certain tabloid slamming her with claims that her own life has been reminiscent of the fictional Hannigan. As husband Brian May watched from the audience, pride beaming on his face, Dobson gave the performance of a lifetime. Whilst up on that stage, she WAS Miss Hannigan, and if any further reboots of the movie creep to the surface, she should be the first person casting directors call.

She was joined by her evil brother Rooster – played impeccably well by veteran theatre actor Richard Meek – and his squeeze Lily, who Jenny Gayner brings to life in an incredibly convincing manner. As a trio, they’re dastardly and utterly abhorrent; but we can’t help to love to hate them.

Alex Bourne takes on what must be the hardest role of the show to bring to life, Daddy Warbucks, and is believable from the moment we meet him. It’s his assistant Grace Farrell however, who threatens to steal the spotlight from any scene she’s a part of. Actress Carolyn Maitland is at home on the stage, and has one of the most beautiful vocals I’ve ever had the pleasure of hearing in person.

Though one moment – namely the President’s cabinet meeting in which the politicians break out into Tomorrowinspired by Annie’s kind words – felt a little out of place and in there to make up time, the production was one that kept audiences hanging on every word. A real triumph, for everybody involved.

Annie continues its run at Manchester’s Opera House until February 16.