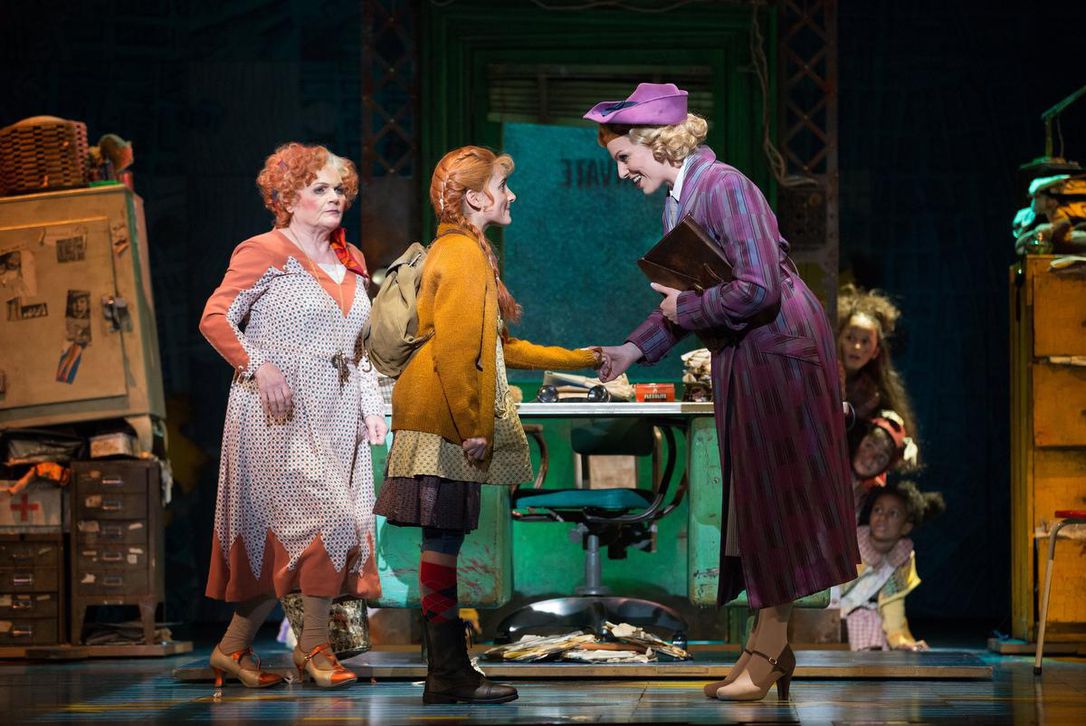 Carolyn Maitland as Grace Farrell was the perfect triple threat, singing, acting and dancing her way through the show with ease

The 1982 movie, together with the several stage adaptations that have followed, have always attracted much attention and yet it feels as if the 2019 version is particularly special.

We all know the storyline, but just in case, it’s the tale of a red-haired orphan, Annie, who cannot believe her luck when she is chosen to spend the Christmas holidays at the home of billionaire Oliver Warbucks and thus escape the evil clutches of the drunken orphanage matron, Miss Hannigan.

When Daddy Warbucks decides to fund the search for Annie’s parents however, Miss Hannigan, her gangster brother Rooster and his moll, Lilly St. Regis hatch a plan to seize the orphan and the money.

Anita Dobson shares the role of Miss Hannigan with Mr Strictly Come Dancing, Craig Revel Horwood on this latest UK tour, but he is going to have his work cut out to upstage her because she was superb.

Soap fans will remember Miss Dobson as the feisty Queen Vic landlady Angie Watts, which believe it or not was 30 years ago now, but she is also an exceptional musical theatre performer, as well as an award-winning dramatic actress; skills which are all too obvious in this latest role.

Her character portrayal, strong vocal performance, ability to execute high energy choreography and exact comedic timing created the perfect comedy baddie. I would guess she has avoided watching any of her predecessors in order to make this role completely her own and certainly succeeds.

The delightful Ava Smith made her professional debut in the role of Annie, with such conviction and competency it shocks. Her excellent vocals and ability to gel with the adult cast were seamless.

Alex Bourne’s performance as Daddy Warbucks was as smooth as silk, with an exceptional tenor voice and warm, polished dramatic skills, while Carolyn Maitland as Grace Farrell was the perfect triple threat, singing, acting and dancing her way through the show with ease.

The strong supporting cast and ensemble brought the whole production together, but of course the real stars were, to quote the song, the Little Girls – in this case Team Empire State – who completely stole the show as Annie’s pals, the orphans.

The talent and confidence the girls displayed was quite remarkable. The opening of the show had them pulling at the heart-strings from the off, followed by the classic number, It’s a Hard Knock Life, which was a massive highlight and sent a ripple of excitement throughout the theatre, setting the scene for an evening of pure fun.

Look out for a stand-out performance from the tiny Tia Grace Isaac as Molly too – she’s one to watch for sure.

The creative team behind this production should be applauded for the artistic, modern set which still manages to retain a childlike ambiance, a superb lighting plot offering atmospheric light and shade to each and every scene and clean, clear sound throughout.

Meanwhile musical director Daniel Griffin had the orchestra on a tight rein, delivering an updated, upbeat version of the score to perfection. The favourites come thick and fast including Easy Street, I Think I’m Gonna Like it Here, NYC, Maybe and I Don’t Need Anything But You, much to the delight of the whole audience, many of whom were joyfully singing along.

And finally, so much for the theatrical expression ‘never work with kids or animals’. Amber the Labradoodle as Annie’s faithful friend Sandy, brought a tear to the eye at every entrance. Another star cast member.

All in all, Annie is great family entertainment and there’s no doubt that everyone left the theatre and danced along the street Fully Dressed and with a Smile.